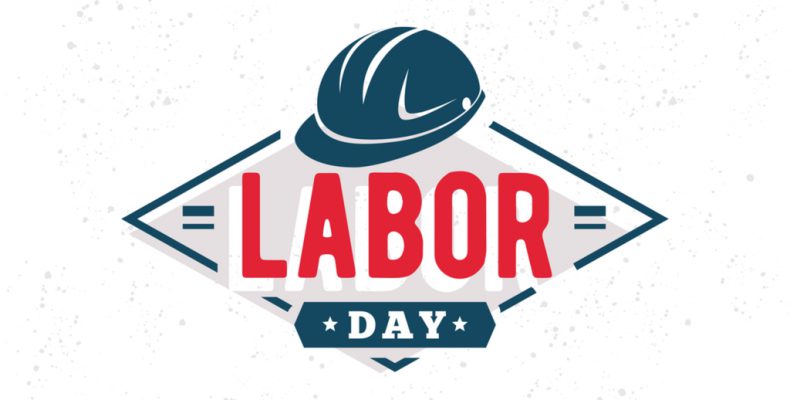 Labor Day is celebrated in the United States every year on the first Monday of September. This is a public holiday dedicated to the achievements of the working class Americans. Labor Day is a yearly tribute for these contributing workers to have strength, prosperity, and for their well-being in the USA.

What is Labor Day?

First and foremost, Labor Day in the United States is considered a federal holiday. It is to recognize the contributions of the workings of society.

This holiday began in the late 19th century. The trade unions and labor movements grew bigger and bigger over the years. They then proposed a day of the year to be set aside, thus Labor Day was promoted by the Central Labor Union with the help of Knights of Labor. Together, they organized the first parade held in New York City.

The American Federation of Labor designated the Sunday preceding Labor Day as “Labor Sunday” in 1909. What this means is it dedicates the spiritual and educational aspects of the labor movement. This title however did not gain any significant traction into popular culture unlike Labor Day itself.

Today, more than 80 countries around the world celebrate a similar holiday called International Workers’ Day held on May 1st of every calendar year. This is derived from an ancient European holiday called May Day.

Who Made Labor Day?

Early history of Labor Day suggests that the event originally started when both the Knights of Labor convened their General Assembly in New York City in 1882. On September 5th of the same year, a public parade including different labor organizations was held under the auspices of the Central Labor Union of New York. It was the secretary of the CLU who is credited for first proposing the national Labor Day as a holiday to be held on every first Monday of September due to the aftermath of the public parade.

An alternative theory maintains that Labor Day was the idea of Peter J. McGuire, then vice president of the American Federation of Labor. He put forward the original proposal in 1882. Based on his accounts, he made the proposition to the Central Labor Union that a day should be set aside as a general holiday for the labor class. He also stated that he recommended a street parade as a public demonstration to showcase the labor’s solidarity and strength.

When it was finally declared a federal holiday, it only covered federal workers initially. It wasn’t until the 1930s where unions encouraged workers to go on strike for them to get a day off. Because of this, all US states including the District of Columbia and the United States territories made Labor Day a statutory holiday.

Why is it Called Labor Day?

Labor Day was created in order to pay tribute to all the contributions, achievements, and sacrifices made by the American worker. It is celebrated through parties and even street parades. At the same time, it symbolizes the end of summer for many Americans.

Basically, the idea of the working man’s holiday caught on with the industrial workers throughout the United States. Since this sector has greatly surpassed agriculture, workers were seen as the backbone of the country. They had the power to essentially stop the production of the entire country if they rioted. Labor Day was created in order to:

• Provide a day of rest for workers all over the country.
• It also provides recognition to what they do for the country.

While the holiday centered upon industrial workers who “labored” during the time, the name carried over to recognize all hard-working Americans for their contributions to the nation. It is essentially a day for them to put their feet up and take a much needed rest.

With Labor Day around the corner, I thought it would be fun to acknowledge some fun facts. Labor Day is a creation of the labor movement and is dedicated to the social and economic achievements of American workers. It constitutes a yearly national tribute to the contribution’s workers have made to the strength, prosperity, and well-being of our country.

1. The idea of Labor Day first became public in 1882. In September 1882, the unions of New York City decided to have a parade to celebrate their members being in unions, and to show support for all unions. At least 20,000 people were at the parade, and the workers had to give up a day’s pay to attend. There was also a lot of beer involved in the event.

2. The New York parade inspired other unions to celebrate. Other regions started having their own parades, and by 1887, Oregon, Massachusetts, New York, New Jersey and Colorado made Labor Day a state holiday. Today, NYC still has a Labor Day parade called Brooklyn West Indian Day Parade, along with college football, refreshing cocktails and a great view of some fireworks over the water!

3. The Haymarket Affair influenced Labor Day. On May 4, 1886, a bomb exploded at a union rally in Chicago’s Haymarket Square, which led to violence that killed seven police officers and four others. The incident also led to May 1 being celebrated in most nations as Workers Day. The U.S. government chose Labor Day instead to avoid a celebration on May 1 and New York’s unions had already picked the first Monday in September for their holiday.

4. Two people with similar names are credited with that first New York City event. Matthew Maguire, a machinist, and Peter McGuire, a carpenter, have been linked to the 1882 parade. The men were from rival unions. More than 100 years after the first Labor Day observance, there is still some doubt as to who first proposed the holiday for workers. In 2011, Linda Stinson, a former U.S. Department of Labor’s historian, said she didn’t know which man should be credited because people over the years confused them because of their similar-sounding names.

5. Grover Cleveland helped make Labor Day a national holiday. After violence related to the Pullman railroad strike, President Cleveland and lawmakers in Washington wanted a federal holiday to celebrate labor and not a holiday celebrated on May 1! Cleveland signed an act in 1894 establishing the federal holiday and most states had already passed laws establishing a Labor Day holiday by that point. Sen. James Henderson Kyle of South Dakota introduced the proposal to make Labor Day a federal legal holiday on the first Monday of September. It was approved on June 28, 1894.

6. The holiday has evolved over the years. In the late 19th century, celebrations focused on huge parades in urban areas. Now the holiday is a wider celebration that honors organized labor with fewer parades, and more activities. It also marks the perceived end of the summer season.

7. Can you wear white after Labor Day? This old tradition goes back to the late Victorian era, where it was a fashion “don’t” to wear any white clothing after the summer officially ended on Labor Day. The tradition isn’t really followed anymore. White supposedly indicated you were still in vacation mode at your summer cottage. These days the fashion world is much more relaxed about what colors to wear and when, but every year you will still hear people say that white after Labor Day is unacceptable, all thanks to some snobby millionaires who decided that was a fashion no-no more than 100 years ago.

9. How many people are union members today? According to the Bureau of Labor Statistics, there were 14.6 million union members in the work force in 2014. There were 17.7 million in 1983.

10. What is the biggest union today? The National Education Association of the United States has 3.2 million members, the NEA (nea.org) is the nation’s largest union and represents public school teachers, administrators, substitute educators, higher education faculty members, education support professionals, retired educators and students preparing to become teachers. The union was founded in 1857 and merged with the American Teachers Association in 1966.

While people enjoy Labor Day weekend, here are some fun facts so that you can enjoy it even more!

1. The very first Labor Day was celebrated on September 5, 1882. This was actually on a Tuesday rather than a Monday as it is celebrated now. Held in New York City, it consisted of a parade where 10,000 workers took part in the parade using unpaid leavs. They marched starting from City Hall going past Union Square all the way to 42nd street and ended at Wendel’s Elm Park where speeches were conducted along with a concert and picnic.
2. The first state that officially declared Labor Day a holiday was Oregon back in 1887.
3. Labor Day is also considered as the unofficial kick off to America’s favorite sporting league, the NFL. Almost every year, the NFL plays the first official game of the season on the Thursday after Labor Day weekend.
4. In 1955, the very first Waffle House opened its doors in Avondale, GA. This coincided with Labor Day of that year.
5. This day is to celebrate and commemorate the contributions and achievements of more than 155 million American men and women in the workforce.
6. Congress passed the act to make the first Monday of September every year the legal holiday in the District of Columbia along with the territories on June 28, 1894.
7. Over the years, the celebration of Labor Day has evolved. It used to focus on parades around urban areas. Today, it is celebrated more with different activities since it is also known to signify the end of the summer season.

Fascinating Fact of the Day

Did you know that the New York parade held in 1882 and considered as the first Labor Day inspired other unions? Other regions started doing their own parades to commemorate this day even though it is an unofficial holiday. This happened all the way until 1887 when Oregon made it into a state holiday. Massachusetts, New York, New Jersey, and Colorado all made the same date as Labor Day as well in the same year.

We have been working with ZERO 1 ZERO INNOVATIONS now for 6 – 8 months and are very pleased with their work. They are very prompt and personal and get the job done. In fact, they have already delivered the WOW for us by handling a very difficult problem. We are definitely delighted with their work

We here at TIMEWISE MEDICAL called ZERO 1 ZERO INNOVATIONS because our computer system was a mess. Our hardware and software were not speaking to each other. We had difficult days figuring out the problem. ZERO 1 ZERO came in, identified the problem, worked efficiently and solved the problem so that we were up and running in no time.

A quality friendly service that has been accountable for repairing all of our technology needs.